Once we arrive in Bhutan we will begin to explore the holiest spiritual sites and important cultural monuments of Bhutan, which provides an in-depth view into the ancient way of life and rich culture that still thrives in Bhutan today. It is a well paced tour, designed to provide the opportunity to really savor the unique highlights of Bhutan’s western and center districts of Paro, Thimphu, Punakha, Gangtey and Bumthang valley, which offer diverse mountainous landscapes, a rich Buddhist heritage including monasteries, temples and chortens (stupas), historical fortresses and extremely hospitable people. You will discover the vibrant history of Bhutan while visiting the Dumtse Stupa, Kyichu Monastery, and the famous Taktsang Monastery (Tiger’s Nest) in the beautiful valley of Paro.

The centerpiece to this tour is time spent exploring the beautiful Bumthang Valley. We will continue driving to the central districts of Trongsa, the birthplace of the monarchy, and the Bumthang Valley, Bhutan’s spiritual heartland featuring 7th century Jambay Lhakhang and Kurje Lhakhang with its rock imprint of Guru Rinpoche. The tour then returns westward to Paro, taking direct flight from Bumthang to Paro valley, where you can hike up to the famous Taktsang Monastery, perched on a cliff 900m above the valley floor. We can easily customise your tour to spend more time in the places that you like best, doing the activities that you are most interested in. We will try to visit all of the places listed below, but the time and date of visits to each location may change based on your interests, weather conditions and road conditions

The flight to Paro is one of the most spectacular mountain flights in the world, with a constantly changing panorama of some of the highest mountains on earth.

We end the day with a visit to Dechen Phodrang monastery meaning “Palace of Great Bliss” located at the north end of Thimphu town. Built in the 12th century, it is one of the original dzongs of Bhutan and currently serves as a Monastic school where over four hundred monks are enrolled.

Today we travel to Punakha valley, the former capital of Bhutan until 1955, and will stop off at Dochula Pass along the way. This popular tourist spot provides stunning 360-degree views of the Himalayas. It is also home to the 108 Druk Wangyal stupas that were built on a small hill to memorialize the Bhutanese soldiers killed in a 2003 battle with Assamese insurgents from India.

Drive towards Gangtey via Wangdue, one of the major towns and district headquarters of Western Bhutan. We then climb steadily passing through semi-tropical vegetation and then finally onto Gangtey/Phobjikha valley (3,000 m) with an alpine environment of rhododendrons and dwarf bamboo farmhouses and temples dot the landscape. The wide and picturesque Phobjikha valley is one of Bhutan’s few glacial valleys, and chosen winter home of black necked cranes (November – March) migrating from the Tibetan plateau.

Visit Gangtey Goempa (Monastery), an important monastery of Nyimapa school of Buddhism, the main seat of the Pema Lingpa tradition. Monastery’s history traces to the early 17th century and back to the prophecies made by the well-known Terton (treasure finder) Pema Lingpa in the late 15th century. In 1613, his grandson, and reincarnation of Pema Lingpa, fulfilled the prophecy by building a Nyingma temple at the location. Kuenzang Chholing, the long white building nearby, is where monks go to meditate for three years, three months, and three days.

Hike the 2 hours Nature Trail and drive towards Trongsa valley

Bumthang Valley is known as the heartland of Buddhism in Bhutan. In 746 AD, it is said that Guru Rinpoche arrived here to exorcise a demon from the king and then converted the people to Buddhism, restoring peace to the region. Guru Rinpoche stayed in the valley to build more than 40 temples.

In the morning visit the 7th century Jambay Lhakhang, which is one of the oldest temple in the kingdom. Songtsen Gampo, a Tibetan King in the 7th Century AD founded it. The king was destined to build 108 temples known as Thadhul Yangdhul (temples on and across the boarder) in a day to subdue the demoness that was residing in the Himalayas. The temple is one of the 108 built in a day.

Proceed to Kurjey Lhakhang, one of the most sacred places in the kingdom where Bhutan’s patron saint Guru Rinpoche meditated and left his body imprints inside the cave.

Enjoy the day exploring some of the many sites around Bumthang. Visit the pool of Mebartso (The Lake of Fire). Me-Bar Tsho (Burning Lake) One of the most sacred sites in Bhutan, the holy lake is said to be one of the holiest lakes in Bhutan. Long time ago, Terton Pema Lingpa (Buddhist saint and treasure discoverer) dived into the lake while holding a burning butter lamp on one hand. Several hours later when he came out of the lake, he was holding some relics one one hand and the butter lamp on his other hand was still burning. Thus the lake was called Me-Bar Tsho (Me-bar=Burning Tsho=Lake).
It is here that Pemalingpa (founder of the Nyingmapa sect) is said to have found treasure hidden by Guru Rinpoche.

After lunch we will drive towards Ugyen Choling palace located in Tang valley, an ancestral home turned into a museum. The restored traditional house has preserved its medieval ambiance and the much of the décor inside the house are the original content from the ancient era. It has history associated with great Buddhist masters and hence the chapel in the complex is considered sacred. Today the revived complex also has guesthouses, extensive exhibitions and the privately owned property aims to provide a place for religious studies, research and a retreat center.

After breakfast we will set off early for a hike to Chumphu Monastery, where the floating statue of Dorji Phamo (Vajravarahi) is situated. It is believed that Goddess Dorji Phamo flew here from Tibet and stayed on in the form of a statue. It is a life-sized statue and it is believed that the statue is floating, some people test this belief by passing a money note below her feet and it passes through smoothly without a hitch. The serenity of this temple is just amazing.

It takes about 1 hour drive to the base and leaving your vehicle the walk is casual and not too tiring as the hike path goes through the forest with lot of shades and cool breeze.

Kyapgoen Ngawang Tenzin is a high reincarnation of the Drukpa Kagyu Lineage of Buddhism in Bhutan. He is regarded as one of the most revered teachers of the Drukpa Kagyu lineage in Bhutan. He is the reincarnation of Drubthop Chenpo Jinpa Gyeltshen Rinpoche who was alive in the 18th century. He started studying Buddhism and learning chanting at the age of 5. By age of 16 he was able memorize all chants, became a dance master and knew how to construct all the sand mandalas. He went on to study Buddhist Philosophy at Tangu Monastery in Bhutan.

At the age of 45, the Royal Government of Bhutan and the center monastic body chose him to become Tshenye Lopen, which means he is now recognized as a philosophy master. Five years later, he became H.E. Dorji Lopen Rinpoche by appointment and oversaw the monasteries and monastic practice of the Drukpa Kagyu lineage in Bhutan.

His Eminence Ngawang Tenzin is recognised as a great scholar and meditation master. His teachings are clear, concise and presented in a way that is understandable to the listener. Throughout his life, he has spent 28 years in retreat. His Eminence always radiates great peace, joy, love, compassion and tolerance and many who have met him have been very moved by these qualities which he exudes.

On our final tour day, we take an exhilarating two-hour hike to Taktsang Monastery (or Tiger’s Nest), one of the most recognizable sites in Bhutan. Built precariously on a hillside cliff, it sits more than 10,000 feet above sea level. Accessible only by foot, we follow a trail decorated with colorful prayer flags along the way to protect travelers from evil spirits. Built over the caves that Guru Padmasambhava meditated in for three years, this eighth-century father of Bhutan Buddhism is said to have been brought there on the back of a tigress. One of the most sacred sites in Bhutan it offers breathtaking views to those energetic enough to make it to the top.

Thereafter, spend the rest of the day at leisure in Paro, take a stroll around Paro Town to pick up some souvenirs.

Terton Sherab Mebar came to Bhutan from Kham (Tibet) in the 15th century and founded this Goempa.

Today we will bid fond farewell to this beautiful Himalayan country and take an early flight back. We hope by now you would have kept many photos and beautiful memories of Bhutan! And we look forward to seeing you again in this beautiful land of endless Enchantments. Tashi Delek! 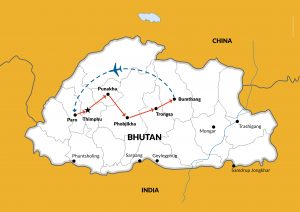 The above Bhutan tour package price includes the followings:

The above Bhutan tour package price do not include the followings:

Bhutan has a fairly formal dress code for both Bhutanese and visitors. For men, a shirt with a collar, preferably long sleeves, and long trousers are required to enter a temple or monastery. For women to enter monasteries and temples, a long skirt (covering to the ankle) or trousers are required and a shirt with long or short sleeves. Bare shoulders and bare legs are not permitted in temples or monasteries (f. ex. do not wear tank tops, spaghetti straps, shorts, or skirts above the ankle). One set of slightly nice clothes is good for hotel dinners. Remember to dress in layers as temperatures vary a lot during the day, especially in spring and summer. A compact umbrella or rain jacket is useful any time of the year. We recommend you wear slip-on shoes, as you’ll need to take them off at every temple or monastery.

Additional information regarding dress:
For women, we can arrange for you to buy traditional Bhutanese skirts, which are very easy to wear, and it would look even more respectful and elegant while visiting monasteries and fortresses. A simple cotton skirt would cost between € 15 – € 30.