The Spiritual Journey covers the valleys of Paro, Thimphu, Punakha, Phobjikha and Bumthang. In these townships you can discover the spirit of the Bhutanese, as well as visit numerous sacred sites, dzongs, temples, landmarks, monasteries, markets, farmhouses, schools & museums. It is a well planned tour, designed to provide the opportunity to really savour the unique highlights of Bhutan’s western districts which offer diverse mountainous landscapes, a rich Buddhist heritage including monasteries, temples and chortens, historical fortresses and an extremely hospitable people. You will discover the vibrant history of Bhutan visiting the Ta Dzong Museum, Rimpong Dzong with its wooden cantilevered bridge. In Bhutan’s capital, Thimphu, you will visit the The National Memorial Chorten, before crossing the 3150m Dochula Pass with its 108 chortens, numerous prayer flags and spectacular Himalayan views into the sub-tropical Punakha Valley featuring the incredible Punakha Dzong and Chimi Lhakang, temple of the ‘Divine Madman’. The centerpiece to this tour is time spent exploring the beautiful Phobjikha Valley, winter home to the rare Black-Necked Crane. Continue onto the central districts of Trongsa, the birthplace of monarchy, and the Bumthang Valley, Bhutan’s spiritual heartland featuring 7th century Jambay Lhakhang and Kurje Lhakhang with its rock imprint of Guru Rinpoche. The tour then returns westward to Paro, hike up to the famous Taktsang Monastery, perched on a cliff 900m above the valley floor. We can easily customise your Bhutan tour to spend more time in the places that you like best, doing the activities that you are most interested in. We will try to visit all of the places listed below but the time and date of visits to each location may change base on your interests, weather conditions and road conditions.

When you first arrive at Paro International Airport, you will be welcomed by our delightful tour guides just outside the arrival hall. At 2,235m above sea level, the first thing you will likely notice is the effect of the high altitudes, so we will give you time to acclimate as we take a short drive for checking into our hotel.
We end the day with a visit to Dumtse Lhakhang – Built in 1433 by the iron bridge builder Thangton Gyalpo, the temple was built to subdue a demoness and so was chained firmly to the ground. It’s three floors represents hell, earth and heaven. Overnight stay at the hotel in Paro.

Set of early for a gentle hike to Chumphu Monastery where the Dorji Phamo, the flying Goddess also known as the floating statue is situated. It is said that Goddess Dorji Phamo flew here from Tibet and stayed on in the form of a statue. Overnight stay at the hotel in Paro.

Today after breakfast, we will proceed to Thimphu. Thimphu is the capital of Bhutan and the perfect location to transition from your familiar lifestyle to our unique country that is like no other place on earth. Here you will begin to appreciate our local customs as you get your first glimpse of monks dressed in traditional red robes, men in striped ghos, and women in brightly colored kiras. Once you settle into your hotel, we will begin to unlock the mysteries of Bhutan by touring Thimphu’s most important sites.
The National Memorial Chorten was built in 1974 to memorialize Jigme Dorji Wangchuk, the third king of Bhutan (1928-1972).
The Thimphu Tashichho Dzong is a fortress and Buddhist monastery with a distinctive Bhutanese architectural design. Sitting aside the Wang Chhu (river), it is the current seat of the Druk Desi, the head of the civil government, and houses the offices of the current king.
Drive up to Kuenselphodrang Nature Park, where you can admire the 169 feet bronze statue of Buddha Dordenma, Vajra Throne Buddha.
Proceed to Changangkha Lhakhang, the oldest temple in Thimphu from the 12th Century.
Overnight stay at the hotel in Thimphu.

After breakfast, our first stop will be at the National Folk Heritage Museum, dedicated to preserving Bhutanese folk arts. The museum is housed in a 3-story 19th century traditional rammed mud and timber house aged more than 150 years. It includes paddy, wheat and millet fields, watermill, kitchen gardens, hot stone bath etc. The ground floor resembles barn, the upper floor resembles safe store and the top most floor resembles living and dining area. The museums displays various materials related to the Bhutanese culture and way of life. Exhibitions include rural households artifacts, equipment, objects and tools.
We end the day with a visit to Simtokha Dzong. Built in 1629, it was the first fortress of its kind in Bhutan and features beautifully painted Buddhist murals and carvings inside. Simtokha means “demon stone” and legend has it that the fortress was used to contain a demon inside a rock, which was terrorizing the region. Today, it is home to one of the premier monk-taught Dzongkha learning centers, the national language of Bhutan.
Overnight stay at the hotel in Thimphu.

Today we travel to Punakha, the former capital of Bhutan until 1955, and will stop off at Dochula Pass along the way. This popular tourist spot provides stunning 360-degree views of the Himalayas. It is also home to the 108 Druk Wangyal Chortens that were built on a small hill to memorialize the Bhutanese soldiers killed in a 2003 battle with Assamese insurgents from India.
Overnight stay at the hotel in Punakha.

Enjoy the day exploring some of the many sites around Punakha, including Khansum Yulley Namgyal Chorten – Built by the third Queen Mother Ashi Tshering Yangdon wangchuck this Chorten is a slpendid example of the Bhutanese architecture and art and is the only one of its kind in the world. It has been built over eight and a half years and its details have been drawn from religious scripture.
Chhimi Lhakhang – A 20 minutes walk across terraced fields through the village of Sopsokha from the roadside to the small temple located on a hillock in the centre of the valley below Metshina. Ngawang Chogyel built the temple in 15th century after the ’divine Madman’ Drukpa Kuenlay built a small chorten there. It is a pilgrim site for barren women.
We will tour what is considered one of the most beautiful site in Bhutan, Punakha Dzong. Sitting at the fork of two rivers, it is a stunning example of Bhutanese architecture. Built in 1637, it is the second oldest and second largest dzong in Bhutan. It was also the location of the royal wedding of Bhutan’s current king Jigme Khesar Namgyel Wangchuck to Jetsun Pema in 2011.
Thereafter walk along the 160 metres Pho Chhu Suspension Bridge, giving you a spectacular views of Punakha Dzong and the Pho Chhu Valley.
Overnight stay at the hotel in Punakha.

Start early today for Gangtey via Wangdue, one of the major towns and district headquarters of Western Bhutan. We then climb steadily passing through semi-tropical vegetation and then finally onto Phobjikha valley (3,100 m) with an alpine environment of rhododendrons and dwarf bamboo farmhouses and temples dot the landscape. The wide and picturesque Phobjikha valley is one of Bhutan’s few glacial valleys, and chosen winter home of black necked cranes (November – March) migrating from the Tibetan plateau.
Visit Gangtey Goempa (Monastery), an important monastery of Nyingmapa school of Buddhism, the main seat of the Pema Lingpa tradition. Monastery’s history traces to the early 17th century and back to the prophecies made by the well-known Terton (treasure finder) Pema Lingpa in the late 15th century. In 1613, his grandson, and reincarnation of Pema Lingpa, fulfilled the prophecy by building a Nyingma temple at the location. Kuenzang Chholing, the long white building nearby, is where monks go to meditate for three years, three months, and three days.
Overnight stay at the hotel in Phobjikha.

Early drive to Bumthang via Trongsa over the Pelela pass (3,300m) and enroute visit Chendebji Chorten, passing through warm/cold broad-leaved and coniferous forests.
Bumthang Valley is known as the heartland of Buddhism in Bhutan. In 746 AD, it is said that Guru Rinpoche arrived here to exorcise a demon from the king and then converted the people to Buddhism, restoring peace to the region. Guru Rinpoche stayed in the valley to build more than 40 temples. Overnight stay at the hotel in Bumthang.

In the morning visit Kurjey Lhakhang, one of the most sacred places in the kingdom where Bhutan’s patron saint Guru Rimpoche meditated and 7th century Jambay Lhakhang. It dates back to the origins of Buddhism in Bhutan and is one of the Kingdoms oldest temples. After lunch, visit Jakar Dzong and Tamshing Lhakhang, founded in 1501 by Pemalingpa and containing interesting and ancient Buddhist wall paintings. Afterwards enjoy exploring the village of Jakar, Bumthang’s main township.
Overnight stay at the hotel in Bumthang.

Enjoy the day exploring some of the many sites around Bumthang. Visit the pool of Mebartso (The Lake of Fire). Me-Bar Tsho (Burning Lake) One of the most sacred sites in Bhutan, the holy lake is said to be one of the holiest lakes in Bhutan. Long time ago, Terton Pema Lingpa (Buddhist saint and treasure discoverer) dived into the lake while holding a burning butter lamp on one hand. Several hours later when he came out of the lake, he was holding some relics one one hand and the butter lamp on his other hand was still burning. Thus the lake was called Me-Bar Tsho (Me-bar=Burning Tsho=Lake).
It is here that Pemalingpa (founder of the Nyingmapa sect) is said to have found treasure hidden by Guru Rinpoche. Overnight stay at the hotel in Bumthang.

The beautiful valley of Paro is home to many of Bhutan’s old monasteries and temples. The country’s only airport is in Paro. The valley is also home to Mount Jomolhari (7, 300m) situated at the northern end of the valley whose glacier water forms the Pa Chhu flowing through the valley.
Overnight stay at the hotel in Paro.

Chele La Pass – Start early for the drive to Chele La Pass, which, at 3, 988m is the highest road pass in Bhutan, snaking upwards through blue pine and rhododendron (Etho Metho) forests for 35 km. On a clear day, the view sweeps away to the snow-dome of Bhutan’s second highest peak, Mt. Jomolhari (7, 314m), and down to the Haa Valley, which only opened to foreigners in 2002 due to its promixity to the border with Sikkim and Tibet.

We will visit Kyichu Lhakhang, a beautiful seventh-century Buddhist temple, one of the oldest in Bhutan. According to legend, a giant demoness lay her body across the Himalayas to prevent the spread of Buddhism. Tibetan King Songtsen Gambo built 108 temples throughout the region and around her body to pin her down, with Kyichu Lhakhang built to hold down her left foot.
After lunch we will drive towards Paro Dzong – also known as Rinpung Dzong, this 15th century massive fortress/monastery, is also the administrative center of the dzonkhag.
Overnight stay at the hotel in Paro.

On our final tour day, we take an exhilarating two-hour hike to Taktsang Monastery (or Tiger’s Nest), one of the most recognizable sites in Bhutan. Built precariously on a hillside cliff, it sits more than 10,000 feet above sea level. Accessible only by foot, we follow a trail decorated with colorful prayer flags along the way to protect travelers from evil spirits. Built over the caves that Guru Padmasambhava meditated in for three years, this eighth-century father of Bhutan Buddhism is said to have been brought there on the back of a tigress. One of the most sacred sites in Bhutan it offers breathtaking views to those energetic enough to make it to the top.
Thereafter, spend the rest of the day at leisure in Paro, take a stroll around Paro Town to pick up some souvenirs. Overnight stay at the hotel in Paro.

Today we will bid fond farewell to this beautiful Himalayan country and take an early flight back. We hope by now you would have kept many photos and beautiful memories of Bhutan! And we look forward to seeing you again in this beautiful land of endless Enchantments. Tashi Delek! 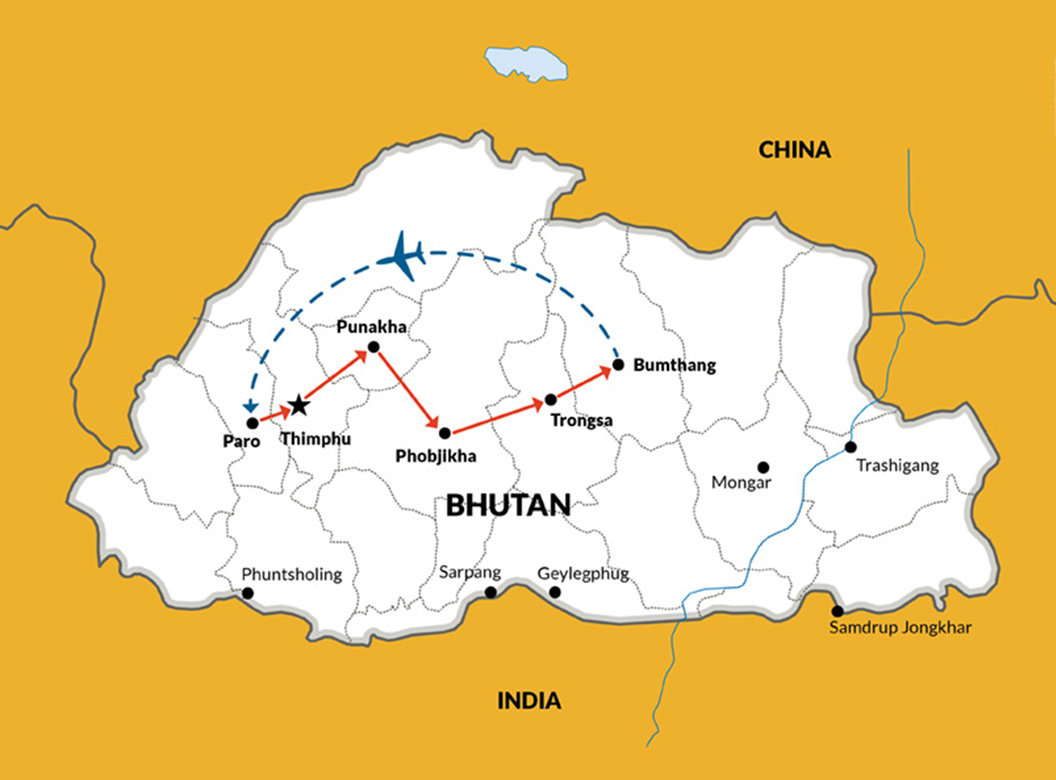 The Bhutan tour package price do not include the followings: